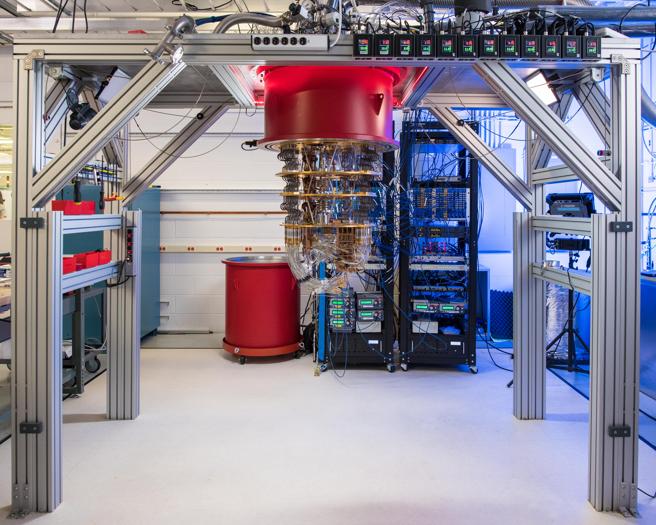 Madrid, November 5, 2019.-   According to information published by the british newspaper, The Guardian, quantum computers may arrive at our homes before 2030. Computer scientists have some formidable hurdles to overcome to make quantum computers useful and commonplace. But with tech firms investing heavily – about $1bn (£780m) to date, with more in the pipeline – many researchers are now confident that rudimentary devices will be put to good use, in combination with standard computers, in the next decade or so.

Quantum computers lend themselves to problems that are essentially too demanding for classical computers to take on. One area where scientists expect them to make an impact is in drug discovery. In the search for new medicines, pharmaceutical companies call on computers to trawl through the structures of scores of molecules to see which might bind to biological molecules and have some useful action in the body. Quantum computers should run these searches much faster by analysing whole libraries of molecules at a time and identifying the most promising drug candidates.

Several startups see quantum computers as a means to design radically new materials, including better batteries, by modelling the quantum behaviour of the subatomic particles inside them.

Another area where the processing capability of quantum computers could prove itself is weather forecasting. The science and art of forecasting have steadily improved with greater computing power, but quantum computers could mean a step change in accuracy. The problem with the weather is that it is so complex that in the time it takes a standard computer to produce an accurate forecast, the weather has already happened.

Inevitably, quantum computers will also be used for financial modelling, where a huge number of variables dictate the movements of markets.

The arrival of quantum computers might not please everyone. Sophisticated devices could in principle crack encryption that is invulnerable to standard computers. But that would take machines with 100m qubits, nearly two million times as many as Google’s processor.

The battle of IBM and Google for quantum supremacy

For Google, it was a historic announcement: a declaration that it had won the race to achieve “quantum supremacy” – the moment that a sophisticated quantum computer performed a task that stumped even the most powerful standard computer in the world.

But for all the fanfare, which saw Google’s CEO, Sundar Pichai, compare the feat to building the first rocket to reach space, the claim has sparked a bunfight. The tech firm’s rival, IBM, was swift to dismiss the excitement. Google has not, it asserts, achieved the highly prized goal of quantum supremacy.

Google published its claim in the journal Nature on Wednesday after an earlier report on the work appeared briefly on a Nasa website last month. The paper describes how a team led by John Martinis, leader of the research team working on quantum supremacy, built a superconducting quantum processor named Sycamore that harnesses the weirdness of quantum physics to crunch through thorny problems.

To demonstrate the device’s computational prowess, the scientists set it the deeply contrived task of checking the randomness of a sequence of numbers. What the quantum computer rattled through in three minutes and 20 seconds would keep the world’s most powerful supercomputer at Oak Ridge National Lab in Tennessee busy for 10,000 years, they claim.

“This experiment was kind of hard to do,” said Martinis. “When we proposed it in the group, people took a while to understand and get this to work.”

But get it to work they did. Writing in the journal, the authors state: “To our knowledge, this experiment marks the first computation that can be performed only on a quantum processor. Quantum processors have thus reached the regime of quantum supremacy.”

Not so, say the IBM researchers. In a blogpost written in response to the work, they argue that the Oak Ridge supercomputer could solve the randomness problem in 2.5 days, perhaps less, depending on how it was programmed. They add that because “quantum supremacy” requires a quantum computer to solve a problem that is beyond a classical computer, Google’s claim does not hold up.

“Google’s experiment is an excellent demonstration of the progress in superconducting-based quantum computing,” the IBM scientists argue. “But it should not be viewed as proof that quantum computers are ‘supreme’ over classical computers.”

Standard computers and quantum computers are radically different. While standard computers perform calculations with “bits”, which must be either 0 or 1, quantum computers have “qubits” that can take any value between 0 and 1. Another quirk of quantum physics allows qubits to be “entangled” such that the value of one is tied to the values of those around it. Make a quantum computer that is stable enough – a tough enough feat in itself – and it can, in principle, explore multiple solutions to a problem at once.

Since the advent of the first experimental qubits, tech firms have been racing to demonstrate what the US physicist John Preskill dubbed “quantum supremacy”. Preskill coined the phrase to define the turning point in computing history when quantum computers showed their true potential by trouncing standard machines.

Google’s Sycamore processor used 53 qubits to plough through the arcane task its masters gave it. According to Pichai, the breakthrough is a step towards using quantum computers to solve real-world problems, such as creating new drugs, designing more efficient batteries, and making fertilisers with less energy. “We’ve already peeled away from classical computers, on to a totally different trajectory,” a Google spokesperson said.

Asked about IBM’s reaction to the achievement, Sergio Boixo on the Google team said: “It’s very important to test the proposals on real supercomputers, because things don’t always work as expected.” Martinis added: “We’re looking forward to having them look at our data and validate our results some more.”

Christopher Monroe, a physicist at the University of Maryland and co-founder of the quantum computing startup IonQ, said Google’s paper might be a milestone in quantum computing, but it was an academic one. “The problem is not likely to be useful for anything, except showing something that appears to be really hard using normal computers,” he said.

But work towards useful quantum computers was “marching along”, Monroe added, saying the devices were likely to help solve a raft of problems, from logistics to understanding the structures of large molecules. “Problems like this can only be solved on a quantum computer,” he said.

Steve Brierley, CEO of the Cambridge-based quantum software company Riverlane, said: “It’s clearly an amazing achievement. I think this is going to be one of those moments when people look back and say, ‘That was the time that really changed this field of quantum computing.’ It is also a great moment in time to stop talking about quantum supremacy, which has unfortunate historical connotations, and move on to talking about quantum advantage, which has a useful application.”

In an accompanying article in Nature, William Oliver, a physicist at MIT, compares Google’s achievement to the first flights of the Wright brothers. The Wright Flyer was not the first airborne vehicle to fly, nor did it solve any pressing problem, but it demonstrated a radical new possibility, the implications of which became clear only decades later. “It is what the event represented, rather than what it practically accomplished, that was paramount. And so it is with this first report of quantum computational supremacy,” Oliver said.

Barcelona, January 26, 2023.- The management of truck fleets for the transport of goods is one of the variables to take into account in any logistics business. The recommendations that WorkTruck has published are very interesting: